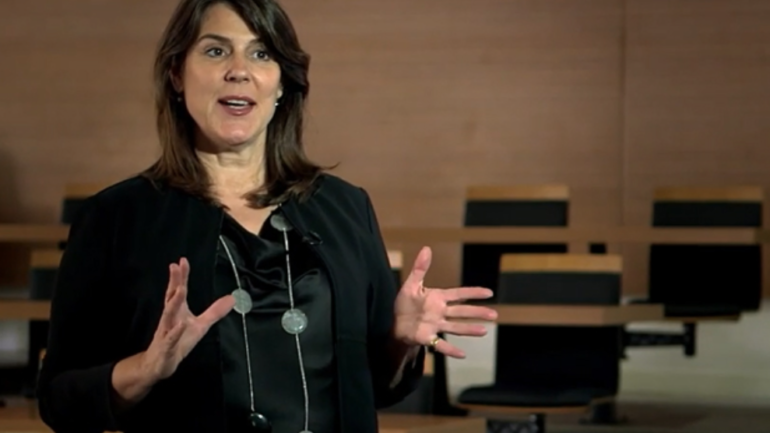 Herminia Ibarra (Professor of Organizational Behavior at London Business School and author of the book ‘Act Like a Leader, Think Like a Leader’) is an expert in the field of leadership & learning. This weekend we asked her four questions.

Can you share your thoughts on the role of energy (mental, social, emotional) in coaching?

Herminia Ibarra: “Nowadays the role of a coach, leader or manager is to unleash energy. Energy which is needed to adapt to changing circumstances.

For a leader it is no longer about command and control or knowing all the answers. Right now it’s all about creating an environment in which people are engaged and stimulated to face challenges. I believe the key to this is asking questions. So I advise coaches and leaders to master the art of asking questions and to stimulate people to ask questions. And this increases engagement.”

What does this mean for coaches and leaders?

Herminia Ibarra: “For many leaders it means they have to stimulate everyone, including themselves, in their team to transform from “Know-it-alls” to “Learn-it-alls”. Therefore a coach is all about ‘ask and listen’ instead of ‘tell and sell’.”

Can you share with us who could serve as a role model?

Herminia Ibarra: “Satya Nadella. This was exactly what he did in transforming leaders at Microsoft. Nadella came from the future, having lead their cloud business. The first thing he did was to make an end to internal competition, to avoid that people were under constant pression and therefore would no longer keep their ideas to themselves.

So Nadella stimulated people to develop a growth mindset (Carol Dweck), instead of a fixed mindset and to create an environment of psychological safety (Amy Edmondson), instead of an inspection culture.

As for his view on business, Nadella only uses leading indicators so all the energy is focused on the future.

In summary: with these four interventions the energy was flowing again at Microsoft:

3.    Create an environment of psychological safety

4.     Focus all the energy on the future by using leading indicators

Final question: what’s your take on learning in times of crisis?

Herminia Ibarra: “One of the things we can learn from the current crisis is that people can adapt very fast to changing circumstances. We’ve all become Zoom masters in a week or so!

Myself I enjoyed a congress online this week. As a result it made me doubt whether I still need to travel in many cases. So a situation like this emphasizes our capability to adapt ourselves to our environment”

Patrick Davidson, co-author of three books, is in the process of writing another book, with Hans van der Loo. The interview with Herminia Ibarra is one in a series of expert interviews.

Herminia Ibarra (Professor of Organizational Behavior at London Business School and author of the book ‘Act Like a Leader, Think Like a Leader’) is an expert in the field of leadership & learning.